Work about to start on £165k revamp for Wandsworth Common playground

Work is about to get underway on a £165,000 revamp of a toddler and younger children’s playground on Wandsworth Common. 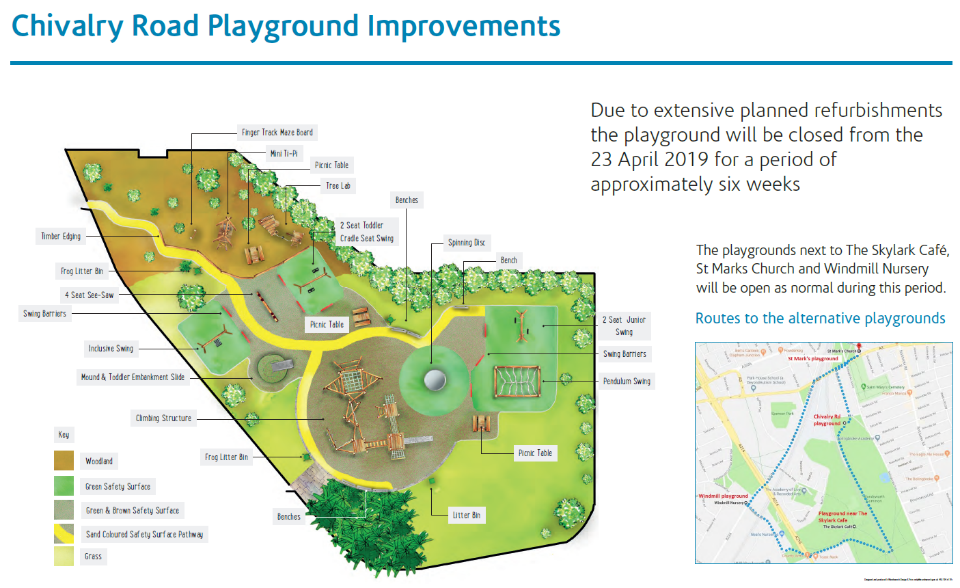 The children’s playground at Chivalry Road is to undergo a major facelift that will see new landscaping and new safe play surfaces provided along with modern new play equipment, including timber swings, slides, see-saws, climbing frames, benches and picnic tables.

Work will commence on April 23 and means the playground will be closed for around six weeks while the work is being carried out. During this time children and their families will be able to use the three nearby playgrounds next to The Skylark Café, St Mark’s Church and at the Windmill Nursery.

This latest round of investment comes just months after the nearby all-weather ball games area in Chivalry Road was refurbished as part of a separate £130,000 scheme. As well as a new playing surface, fencing and renewed sports equipment, the floodlighting was also upgraded enabling young people to use it after dusk.

Environment spokesman Cllr Steffi Sutters said: “The designs for this playground and the play equipment it will feature were chosen by local people when we staged our public consultation last year so these improvements should be very popular with local families and our youngest residents.

“Combined with the improvements at the nearby ball games area which is aimed at slightly older children and teenagers, it means this corner of Wandsworth Common has something to offer young people of all ages.”

Both schemes have been managed on behalf of the council by its leisure and culture contractor Enable Leisure and Culture and funded via the Wandsworth Local Fund (WLF), which holds cash levied by the council on housing developers to help pay for community and neighbourhood infrastructure improvements in the borough.

Over the past three years more than £7.2m in WLF money has been spent on local improvement initiatives including schemes to support safer communities, employment opportunities for young people, better pavements and improved playgrounds.

Those chosen for funding are mainly suggested by local residents who are encouraged to bring their ideas to their local ward councillors so they can be properly considered. Funding is only approved for schemes that meet criteria based on the priorities set by local people.

Several public realm improvements will be carried out to smarten up shopping streets, including Putney High Street, Bedford Hill and Bellevue Road.

And several playgrounds have or will be revamped, including Upper Tooting Park, Godley Gardens, Swaby Gardens, Leaders Gardens, King George’s Park and Battersea Park. Improvements are also being made at Falcon Park, Furzedown Rec and at Fred Wells Gardens.