Clean air message gets through

This year’s Clean Air Day events successfully raised awareness of the measures individuals can take to reduce air pollution, and the council this week confirmed it will support the day again next year.

Wandsworth recently set itself ambitious targets to tackle pollution and climate change. This was the third year it supported Clean Air Day, and the council is also supporting next month’s Car Free Day.

Clean Air Day on June 20 is a nation-wide series of events to raise awareness of air pollution issues, supporting people to reduce the amount of air pollution they create and helping them work together to improve air quality.

Two clean air day events were held in Wandsworth, at Southside Shopping Centre and St George’s Hospital. The council’s air quality officers were present, as well as volunteer Air Quality Champions and a team from Rollapaluza bikes to provide some fun. 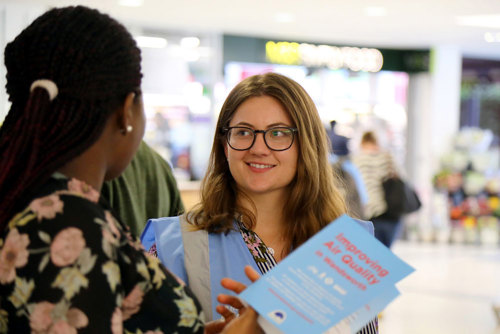 St George’s Hospital has confirmed it would like to host an event next year, after a huge amount of interest from patients, visitors and staff. At Southside children from The Roche primary played a game of air quality snakes and ladders and learnt about air pollution. The six pupils were tasked with passing on what they learnt to the rest of the school and to their families.

“We’re delighted to confirm that the council will support Clean Air Day 2020 as part of our pledge to become inner London’s greenest borough Together we can tackle air pollution and reduce carbon emissions,” said the council’s air quality spokesman Cllr Paul Ellis.

Measures taken by the council to improve air quality include working with contractors to reduce pollution from building, lobbying for cleaner buses, installing an extensive network of car charging points and anti-idling campaigns outside schools. This autumn it will consult on a School Streets scheme at five borough primaries to see if parents and local people back proposals to close roads outside schools to traffic at drop-off and pick-up time.

In addition, Wandsworth has set out ambitious goals to become carbon neutral by 2030 and a zero-emission council by 2015. Find out more.