Nominations for the 2019 Active Wandsworth Awards for sport and physical activities are open – but you must nominate by January 26. 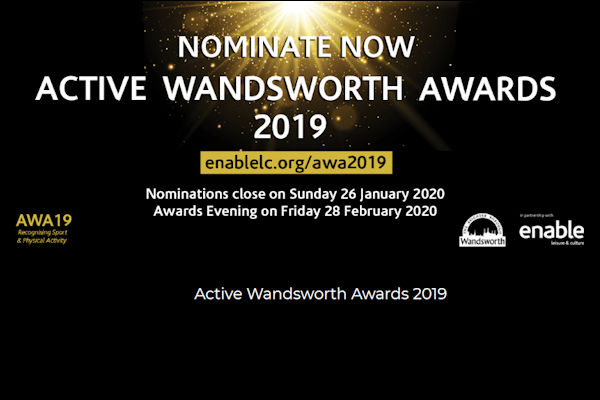 The awards recognise the commitment and achievements in 2019 of the many people involved in sport and physical activity within Wandsworth including talented local sports performers, coaches, volunteers, schools, organisations and clubs.

The awards are run by Active Wandsworth, a partnership led by Wandsworth Council between the council and key organisations including Enable Leisure and Culture, Places Leisure, Roehampton University and Healthwatch.

Active Wandsworth drew up the Active Wandsworth Strategy with the aim of making Wandsworth the most active borough in London. Recent figures show that it has achieved that aim, with an increase of almost nine per cent of Wandsworth residents categorised as active over the past 12 months.

The council’s leisure spokesman Cllr Steffi Sutters said: “It’s been a great year for the Active Wandsworth partnership and I am sure there are many coaches, sportspeople, clubs and other who have contributed to this success.

“The Active Wandsworth Awards are our chance to recognise their efforts, and if you know someone who has inspired others to become more active, who works to make grassroots sports and physical activity happen or simply a club or individual who have had great success in 2019 then nominate them now.”

There are ten award categories

Nominate Online. Shortlisted nominations will be invited to the Active Wandsworth Awards on Friday 28 February at Wandsworth Civic Suite.