More than a thousand children from Wandsworth’s primary schools are about to take part in special lessons that use real life scenarios to help them stay safe, avoid dangerous everyday situations and tell them how they could save a friend’s life.

The scenarios are themed to create a greater awareness by teaching year five pupils how to cope with dangerous and potentially life-threatening situations they could encounter in everyday life.

And as part of efforts to widen its scope and achieve greater community involvement local people with special expertise are being encouraged to take part. This includes for example pharmacists who could explain the risks and dangers associated with prescription medicines, local qualified first aiders who could pass on their life-saving skills or IT experts who could help young people avoid online threats.

Chairman of the Wandsworth Junior Citizen Scheme Cllr Richard Field said: “This is an excellent initiative that helps so many of our young people overcome the kind of difficult, and potentially life or death situations they could be confronted with in their day-to-day lives.

“Through the use of actors and role play in real-life scenarios they learn how to keep calm, think quickly, and most importantly remain safe. They also learn how to help others who may be injured and how to act as good citizens.

“We're very proud of our scheme which has been providing these important messages to young people in Wandsworth for more than three decades.

“And we’d like to widen the initiative for the autumn sessions and tap into the reservoir of knowledge that many of our residents possess and would be keen to pass on. As well as professionals from the police, fire and RNLI we’d like to get more members of the community involved in this superb safety initiative.” 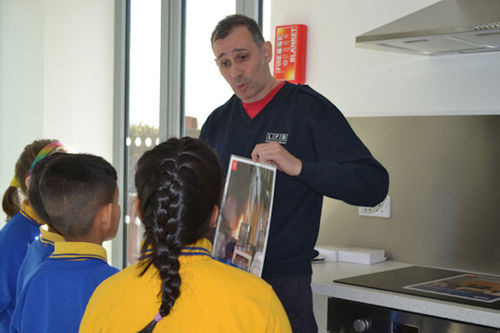 Around 2,000 ten-year-olds take part in the scheme every year – with sessions held every March and October at Southfields Academy. It began in 1988 and is the longest running initiative of its type in the UK. Many of the lessons are delivered by uniformed emergency services personnel like police officers and firefighters.

The children play active roles in 12 different “real life” scenarios which include avoiding so called “stranger danger” situations, the risks of online grooming, steps they can take to reduce the chances of them becoming a victim of crime, staying safe in the kitchen and the risks and hazards of playing on or near railway lines or near lakes and rivers.

Often what is learnt in one scenario will be reinforced in another. For example, children are taught how to identify dangerous drugs, and are then led into a 'derelict house' scenario where those substances are present.

Other aspects of the scheme include lessons on first aid including how to administer CPR and placing people in ‘the recovery position’, how to how to make a 999 call, escape a fire and also how to be a good citizen, such as helping elderly neighbours.

Feedback from last year’s sessions in the spring, when 1,019 pupils from 21 schools took part, showed that over 90 per cent of teachers thought the safety messages had been delivered very effectively, while 100 per cent said they were very satisfied with their visit to the scheme.

Comments included: “Engaging, well-paced and brilliantly organised”; “Fantastic information, plan to revisit back in school with pupils and families”; “Such an effective scheme, the children come away with a lot” and “All scenarios are very good”.

The Wandsworth Junior Citizen Scheme is an ongoing collaboration between the council, the Metropolitan Police, the London Fire Brigade, British Transport Police and The Royal National Lifeboat Institution (RNLI).

If you are retired, a parent with time to spare, a student looking for some valuable work experience or a local business or community group that could offer something positive to the scheme then please email andrew.jolly@richmondandwandsworth.gov.uk or visit www.wandsworth.gov.uk/juniorcitizen to find out more.

The 12 scenarios the children take part in are as follows;