One of Battersea Park’s most popular and historic water features could be brought back to life following a detailed study.

A feasibility study has been carried out into the restoration of The Cascade - an impressive Victorian waterfall set over a large rockery - which needs investment for the water to flow again.

The Cascade dates back to the mid-19th Century and was one of the park’s original features when it opened in 1858.

In Victorian times, rock gardens and ornamental rockwork featuring alpine planting were popular and using artificial Pulhamite stone it was possible to create cascades, rocky streams and even bridges.

The Cascade was created using this patented anthropic rock material, which was invented by James Pulham (1820-1898), and was so realistic it fooled some geologists of the time. While the recipe went to the grave with Pulham, it is thought to be a blend of sand, Portland cement and clinker sculpted over a core of rubble and crushed bricks.

The Cascade is highlighted in the 2008 book ‘Historic London: An Explorer’s Companion’ by Stephen Inwood, who writes: “It is pleasant to walk round the lake, one of the original features of the Victorian park. Following the lake anticlockwise from the East Carriage Drive, you will come to the Victorian cascade which is more likely to be flowing at the weekend. The Pump House, on the northern edge of the lake, was built in 1861 to house the steam engine that raised water for the cascades and the lake.”

Environment spokesman Cllr Steffi Sutters said: “We would love to bring The Cascade back to life. It is one of the park’s most important historical features.

“We are hopeful the feasibility study will give us the information we need so that we can explore options to restore it and get the water flowing again.”

The costs of the study have been partly met by funds raised when Battersea Park hosted the London stage of the Formula E world championship in 2015 and 2016. This helped generate around £840,000 to be spent on investment in the park, with the total sum including substantial financial contributions from the developers of the Battersea Wharf and Chelsea Bridge Wharf housing schemes and also from local amenity group The Friends of Battersea Park. 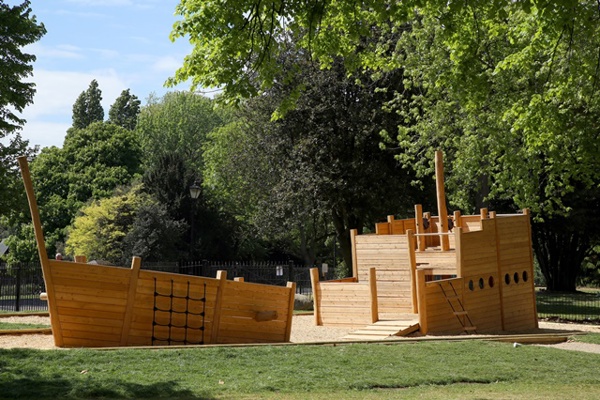 Battersea Park covers some 200 acres and was opened by Queen Victoria in March 1858 having been created out of fields and marshland to create a place of healthy recreation for the huge numbers of people who had moved to London during the Industrial Revolution.

It was designed by the famous Victorian engineer James Pennethorne and the planting overseen by legendary adventurer John Gibson, who scoured the four corners of the globe for exotic plants to display in the park's famous sub-tropical garden, the first of its kind to open to the British public.

Throughout the 20th century, much of the original horticultural diversity was lost, largely due to the impact of two world wars when the park was not only used for allotments and pig farming, but also for troop dispersal areas, bomb shelters and anti-aircraft gun emplacements. The park also suffered extensive bomb damage from Luftwaffe bombers on missions to disable neighbouring Battersea Power Station, as well as being hit towards the end of the war by a V1 rocket.

In 1951 the park was chosen as the home for the Festival of Britain Pleasure Gardens, designed by Russell Page. A permanent funfair was also included, which for many years proved enormously popular with people of all ages, but which eventually closed in 1974.

Under the stewardship of the Greater London Council, the park became somewhat rundown in the 1970s and 80s and it was eventually taken over by Wandsworth in 1986 when the GLC was abolished. Since then, millions have been spent transforming it into today’s popular and much-loved open space.

For more information about the park and its attractions visit www.wandsworth.gov.uk/batterseapark.