Wandsworth Council’s Active Wandsworth Awards have celebrated sporting individuals, clubs, volunteers and coaches for all their hard work and exceptional achievements in 2019.

The standard of nominations were particularly high amongst the Sports Personality categories with Herne Hill Harrier and GB Sprinter Kristal Awuah (pictured below) scooping the Sports Person of the Year Award in a year where she has become the GB under 23 champion over 100 and 200m and has been part of the senior relay teams at World and European level. Ernest Bevin School pupil Shayden Walters collected the Junior Sports Person of the Year Award following his success at the British Cadet and Commonwealth Cadet Judo Championships. 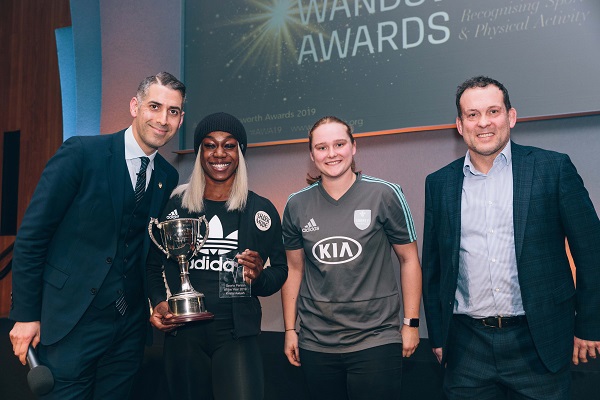 Battersea Ironsides Rugby Club won the Sports Club/Organisation of the Year for its work in local prisons as well as its continued growth and membership and its support for charities.

Volunteers were also recognised across a number of sports and organisations.  Nathan Horsford at Putney and Roehampton Boxing Club received a special recognition for his Outstanding Contribution to Sport and Physical Activity over a number of years.

Wandsworth Council’s cabinet member for Community Services and Open Spaces, Steffi Sutters, said: "We owe so much to the many talented sports men and women,  coaches, clubs and others who contribute so much to sport and physical activity in Wandsworth.

“It was a real pleasure to hear  be at the Awards to hear their stories and to help  celebrate their achievements. Congratulations to all.”

The Active Wandsworth Awards are managed and delivered by Enable Leisure and Culture on behalf of Wandsworth Council.

A full list of winners and photos from the evening can be found at www.enablelc.org/awa2019.