Thanks to National Lottery players, the fascinating story of Tooting Common over the years is now readily available for local people to read and learn about following the publication of a new historical guide.

The Common Story: A History of Tooting Common was officially unveiled on Saturday at the Tooting Bec Lido pavilion to mark the first day of this year’s Wandsworth Heritage Festival.

The publication is the outcome of a four-year research project to highlight the people and events that have shaped Tooting Common over the centuries - with contributions from local community groups, residents, archivists, council staff and professional historians.

The project’s main partner was the Tooting History Group, but other local historical societies also made important contributions including the Balham Society, The Streatham Society and the Wandsworth Historical Society.

Tooting Common’s existence today is largely owed to the actions of generations of local people who have fought to protect it. From an anti-enclosure riot in 1794 to the protracted legal battle of Betts vs Thompson in the 1860s, successive interventions by local people have ensured its survival.

One volunteer discovered that a surprisingly high number of trained keepers maintained and policed the common in the early years of the 20th century. In 1909 there were 13 permanent staff, all of whom were dressed in a smart combination of tweed, velvet and corduroy.

The history of the common is also peppered with crime and misdemeanour. In the seventeenth century, trespass and illegal grazing were the worst offences, but a century later it had become the infamous haunt of highwaymen and 'footpads' (thieves).

At the turn of the nineteenth and twentieth centuries, the common was the location for a number of violent crimes, including a 'dastardly attack' on ladies in a carriage in 1895 and the infamous shooting of local governess Florence Royale by her jilted former fiancé George Ritson in 1904.

The archives of Streatham Workhouse, constructed on the Common from 1791, revealed a great deal about the lives of the governors, master and matron, and the inmates. Perhaps most surprising of all was the volume of gin consumed on the premises, which had to be delivered on an almost weekly basis.

Chair of the Tooting History Group, Philip Bradley said: “We're very pleased to have been able to contribute to The Common Story: A History of Tooting Common.

“Tooting Graveney and Tooting Bec Commons are highly valued green spaces for local people. We hope that the research undertaken by THG members will add to everyone's enjoyment of Tooting Common and give them a greater understanding of how it has become the much-loved open space it is today."

Wandsworth Council commissioned Dr Katy Layton-Jones, a cultural historian and historical consultant, both to undertake research and oversee the research undertaken by volunteers as part of the heritage project. The project combined both archival and on-site research, and in the process, offered opportunities for research training and volunteering and a chance to contribute directly to the interpretation of this historically significant space.

She said: “The project demonstrates the range and depth of historical enquiry that community groups can accomplish working alongside professional historians and archivists. The myriad stories and historical details uncovered by the project have transformed our understanding of this famous common. We have had to reconsider our preconceptions about its past in a way that will no doubt shape its future." 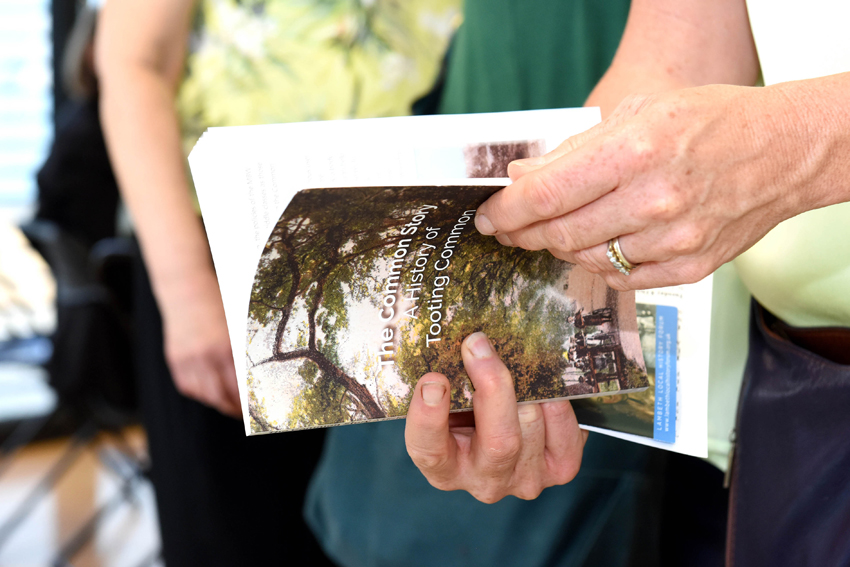 The launch event was organised by the Tooting Common Heritage Project in partnership with Tooting History Group and was attended by 85 people.

The Tooting Common Heritage Project is funded by The National Lottery Heritage Fund and Wandsworth Council. It is being delivered by Enable Leisure and Culture in partnership with the South London Swimming Club, idverde, the Tooting History Group, Wandsworth Historical Society and The Woodfield Project.

Work in the pipeline, or already completed, includes

Tooting Common covers 220 acres and is the largest open space managed by the council. It has been designated by the GLA as a Site of Importance for Nature Conservation – and is ranked in the top tier of these protected spaces – a site of Metropolitan Importance.

Find out more about the Tooting Common Heritage Project.

The Tooting Common Heritage Project is working in partnership with local community groups to improve and monitor biodiversity and habitats, to conserve and restore heritage landscapes and architectural features, uncover the hidden history of the common as well as teaching people about its rich past and biodiversity. It will provide new volunteering opportunities and transferable skills to local residents.

About the National Lottery Heritage Fund

Using money raised by the National Lottery, we Inspire, lead and resource the UK’s heritage to create positive and lasting change for people and communities, now and in the future. www.heritagefund.org.uk. Follow @HeritageFundUK on Twitter, Facebook and Instagram and use #NationalLotteryHeritageFund