Highlighting the route of the new Tube tunnels that connect Battersea and Nine Elms with Kennington and the rest of the Northern line, the Line of Light festival will celebrate the communities that live above the new line.

Following the 3.2 kilometres of tunnel that link Battersea Power Station, Nine Elms station and Kennington, a large-scale light installation will project the underground route into the sky and illuminate the stations and buildings along the way with visual projections.

An accompanying locally created soundscape will add a specially commissioned ‘album’ of the area. The light installation will appear between 6.30pm and 10pm on 29 and 30 October, with additional free daytime activities taking place at two festival hubs near the new Tube stations.

Line of Light is a large-scale light installation created by Projection Teknik which uses a daisy-chain of high-density beams to paint the route of the tunnels onto the sky and buildings along the route will be illuminated by moving projections inspired by themes of connectivity and togetherness. An accompanying series of soundscape podcasts will capture the music, voices and atmosphere of the neighbourhoods directly above the tunnels of the Northern line extension.

Community leaders, libraries, local arts organisations and Royal College of Art students are working with a sound artist to create an ‘album’ of the area that reflects the diversity of the people and places. Violinist Emma Smith, originally from Battersea, will interpret local musicians’ music into a string arrangement, and the audio tapestry will be released as a series of 3-7 minute podcasts available later this month to download from the website to listen to along the route or at home.

The two free festival hubs, running from 4pm to 9pm, will bring a festival vibe bringing together local businesses and communities with free performances. The New Union Square hub, SW11, will feature street performances and acoustic acts, while the festival hub near Nine Elms station will be featuring live music with a line-up of local acts to be announced.

Wandsworth Councillor Steffi Sutters, Cabinet Member of Community Services and Open Spaces said “The Line of Light festival will be a landmark celebration of the historic opening of the Northern line extension which is a complete game-changer for this part of Battersea and Nine Elms.

“I’m thrilled Wandsworth Council is presenting this innovative light festival along the route of the tunnels and would like to thank our committed local partners, neighbouring boroughs and TfL for their support in helping us highlight this new transport connection and what it means for the area. It’s a great example of how we can strengthen and build new connections between our diverse communities – old and new.”

Lambeth Councillor Sonia Winifred, Cabinet Member for Equalities and Culture, said: “The opening of the Northern Line extension gives us a great opportunity to reflect on the new connections this brings to the communities living along the route, both new and old.

“The Line of Light festival is a fantastic way for our diverse communities to come together to explore their neighbourhoods, and highlight what they have to offer, through a spectacular celebration of light and sound, where local voices can be heard.

“We hope this festival will have something for everyone and showcases the creative talents of all the artists involved.”

Find out more details when announced at nineelmslondon.com/lineoflight

Line of Light is presented by London Borough of Wandsworth and London Borough of Lambeth, with partners Battersea Power Station, Embassy Gardens, R&F Properties, Urbanest and VINCI St. Modwen. Supporting partners are TfL and Vauxhall One, and the event is delivered with technical partner PANI Projection and Lighting. 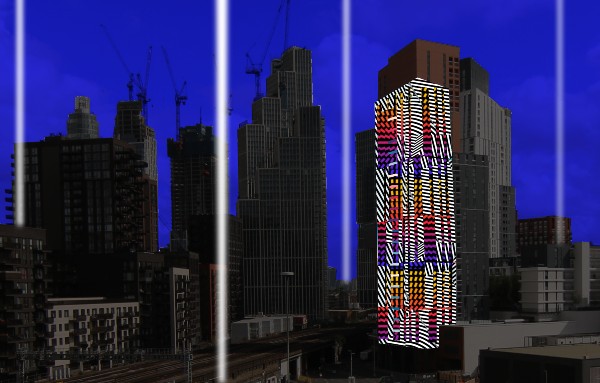