Residents who own an electric vehicle will be able to power them up free of charge for a 24 hour period next week at hundreds of locations across Wandsworth. 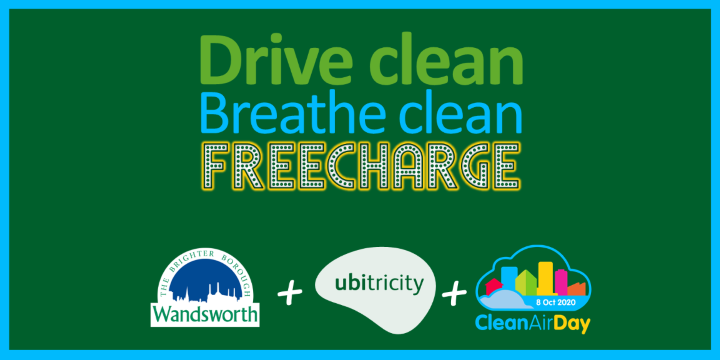 The initiative is part of Clean Air Day on October 8. To mark the occasion leading EV charge company ubitricity is giving its customers a free charge. Any car plugged in to a ubitricity charging socket in the borough in the 24 hour period starting just after midnight on October 8 will not have to pay.

Clean Air Day is a national campaign that aims to raise awareness of air pollution and the risks it poses to health. Poor air quality can cause heart and lung disease, is linked to low birth weight and children’s lung development and may even contribute to mental health issues.

The council is committed to tackling air pollution and improving the borough’s air quality. Included as part of these efforts are steps to encourage residents to switch from diesel and petrol-powered vehicles to cleaner and greener electric versions.

To encourage people to make the switch, the council has embarked on an ambitious programme of fitting on-street charging sockets in partnership with ubitricity and Siemens. There are more than 550 EV charging points in the borough of Wandsworth – including just under 400 ubitricity ones.

This number was boosted last month with the completion of a project to install 167 sockets including every available and suitable lampost in two neighbourhoods in Battersea’s Shaftesbury ward and Putney’s Thamesfield ward.

By early next year another 140 lampost sockets are set to come on stream with further installations planned later in 2021. This will help the council meet its current target of delivering nearly 900 on-street charging points.

These two areas in Battersea and Putney were chosen because they will both be directly adjacent to an expanded Ultra Low Emission Zone (ULEZ) which the current Mayor plans to deliver in 2021 - to include all areas within the north and south circular roads.

If the ULEZ is extended as currently proposed, all vehicles and motorcycles which enter the zone but don’t comply with its emission restrictions will have to pay £12.50 a day – but electric vehicles will be exempt.

Wandsworth residents are already streets ahead when it comes to embracing electric vehicle technology. The annual number of plug-in vehicles registered in the borough has grown from 252 in 2012 to 4,527 in 2019 – with numbers rising by more than ten per cent every three months.

Transport spokesman John Locker said: “We welcome this initiative by ubitricity which will hopefully help to encourage residents thinking of buying a new car to seriously consider an electric one.

“The rapid growth in the number of charging points that we have overseen in Wandsworth in partnership with ubitricity and Siemens means that running an EV is now much more of a realistic choice for our residents. Fitting sockets to so many lamposts has helped make electric vehicle ownership a realistic prospect for our residents.

“We want to be pioneers in promoting more eco-friendly and emissions free forms of transport and part of that is doing what we can to help persuade people who do need their cars to ditch diesel and petrol and go electric.

“This is just one of the measures the council is putting in place to improve local air quality.”

To find out more about the ubitricity free charging offer and details of its services visit the company’s website.

For more information about electric vehicle ownership in the borough visit www.wandsworth.gov.uk/driveelectric.