Wandsworth Council has launched an open call for designers to transform a Nine Elms railway arch into a key gateway to the new Northern Line Extension stations, in partnership with the London Festival of Architecture.

The historic railway arch known as Arch 42 will be a key public route leading to new London Underground stations at Nine Elms and Battersea Power Station, currently under construction as part of the Northern Line Extension.

The open call gives architects, landscape architects, designers and artists the opportunity to create new gateways at the entrances of Arch 42, improving the visibility of the new route and connecting the existing and emerging neighbourhoods around the railway line.

'Bring together both sides of the railway line'

Leader of Wandsworth Council, Councillor Ravi Govindia said: "We’re delighted that this crucial linkage is finally opening up in time to connect the riverside path and open spaces with the new Northern Line Tube stations.

“Our plan to open up Arch 42 as one of the area’s key gateways follows the fantastic redesign of Thessaly Road bridge that the LFA and transport partners also helped us to deliver in 2019. I’m looking forward to seeing how another well-designed route can help us bring together residents and businesses on both sides of the railway line and provide a new attraction for visitors to the area."

Arch 42 is one of a series of arches forming a section of the Victorian railway viaduct carrying the south western main line into Waterloo station. Currently presenting a significant barrier to movement in the local area, it will be opened up to create a vital new route between Nine Elms station, Nine Elms Lane and the River Thames, and linking up with pedestrian and cycle routes running through Nine Elms. 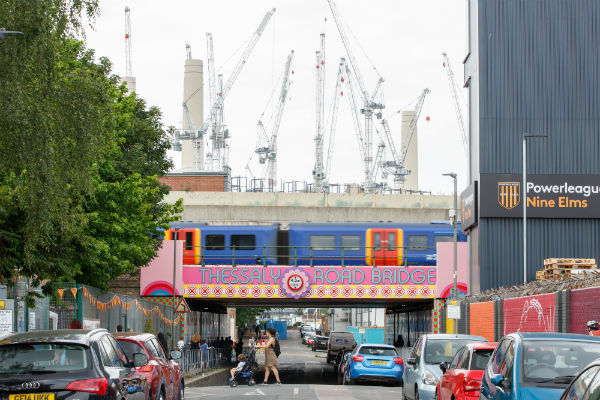 The competition follows the huge success of 2019's 'Happy Street' redesign of the Thessaly Road underpass in Nine Elms by artist Yinka Ilori, organised by Wandsworth Council and the London Festival of Architecture.

Like 'Happy Street', the Arch 42 Gateways project will create a lasting and transformational enhancement of the Nine Elms public realm, engaging and delighting the public and giving the winning team a highly visible platform to showcase their design and placemaking talent.

The London Festival of Architecture (LFA) and Wandsworth Council are keen to encourage broad participation in the competition – including teams who have not entered LFA competitions before. The LFA and Wandsworth Council are hosting an online meeting on Tuesday 29 September to discuss how to put a successful competition submission together. Find out how you can prepare an entry at www.londonfestivalofarchitecture.org

The deadline for the first stage of the competition - a simple call for expressions of interest – is 12noon on Friday 23 October. Shortlisted teams will then be asked to develop their proposals for a public exhibition in November. The overall winning design will be installed ahead of the opening of the Northern Line Extension.

The Arch 42 Gateways competition is being judged by an expert panel including:

Rosa Rogina, head of programme at the London Festival of Architecture, said: “It’s great to be working once again with Wandsworth Council on a design competition that will make a real difference to so many people. Opening up new routes is critical to making London a more people-friendly city, and the Arch 42 Gateways competition is a chance to go even further and brighten up everyday lives. For the place, its people and the winning team, this has the potential to be transformative and very special.”

Christopher Mansfield, chartered engineer at Network Rail said: “Millions of passengers each year travel over this Victorian structure, which has served its purpose well for over 170 years. We’re thrilled that designs are now being created so that each day thousands of new users will travel underneath to see and experience this Victorian engineering marvel in a new way for years to come.”