An iconic Balham landmark that shines a light on the history of the town centre has been brought back to life following a successful crowdfunding campaign with additional support from Wandsworth Council.

On Monday the Mayor of Wandsworth Jeremy Ambache performed the ceremonial switch-on of an illuminated sign that has adorned rooftops in Bedford Hill for more than half a century.

The brightly coloured neon advertising sign ‘Roberts for Ekcovision’ was installed in Bedford Hill in the 1960's and had fallen into disrepair over many years, but is once again shining brightly thanks in large part to the fundraising efforts of the granddaughter of the shopkeepers who originally installed it.

Alison Sinclair raised more than £20,000 to pay for the sign’s repair and restoration - thanks in part to donations from local residents but also to significant contributions from the Heritage of London Trust and private members club Soho House, which recently opened a restaurant and bar in Bedford Hill.

The council has also participated by agreeing to fund the sign’s ongoing costs.

Ms Sinclair said: “I am thrilled to see this sign, that was originally over my grandparents electrical shop, restored and relit. It has been a long journey but I have received tremendous support from the people of Balham as well as from my family and friends. It has been heart-warming talking to so many current and former local people who value this sign as a memory of their past. I had no idea when I first started on this, that it would mean so much to so many.

“I’m really grateful for our local member support and grateful to Wandsworth Council for agreeing to fund the ongoing running costs and of course the Heritage of London Trust who saw the historical value of the sign and awarded their maximum grant towards the restoration. The remaining costs were raised via a Go Fund Me page and included a substantial donation from Soho House. I am very grateful to all who donated their hard-earned cash and to those who donated their time in order to help me.”

According to her research the name Roberts originated from one of the electrical shop’s owners in the 1920s and its main business was repairing and selling radios. Years later the main business had become television rentals - and at some point in the 1960s TV manufacturer Ekco suggested installing the sign above the business.

As well as the Mayor of Wandsworth, also in attendance at the official unveiling was council leader Simon Hogg and the self-styled ‘Night Mayor of Balham’ writer and comedian Arthur Smith.

Cllr Hogg said: “The restoration of this brightly coloured neon sign has paved the way for its welcome return to the Balham skyline and is a wonderful addition to the town centre.

“Alison Sinclair has done an amazing job in raising the money for its restoration and I’m just pleased that the council has been able to play a role in bringing a little piece of Balham’s history back to life.” 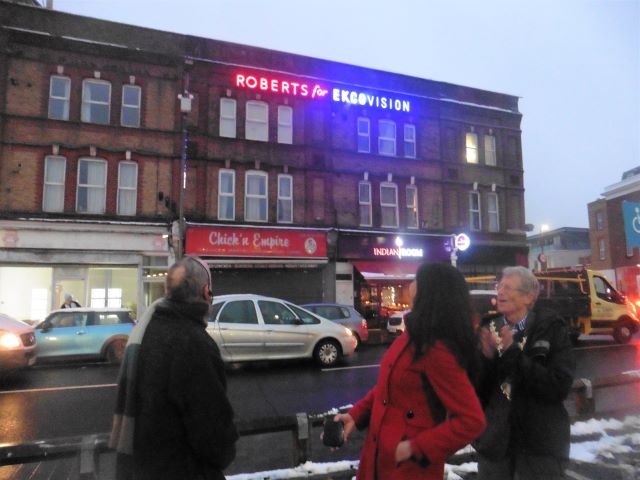