The Mayor of Wandsworth

The Mayor of Wandsworth for 2019/21 is Councillor Jane Cooper who was previously the Deputy Mayor for 2018/19.

Councillor Jane Cooper was born and brought up in North Yorkshire and has lived in Wandsworth for 43 years. Jane is a retired Civil Servant and Magistrate and served as a school governor for over 30 years. She has a keen interest in theatre and is a joint patron of Southfields theatre group and a patron of group 64. 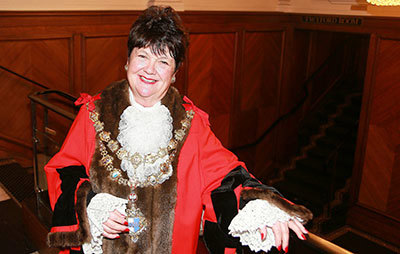 Find out about the charities being supported by the mayor this year and how to make a donation.

Every year the Mayor recognises local people who have volunteered their time to help others via the Roll of Honour award and a special Wandsworth pin by the mayor.

The Mayor of Wandsworth takes the civic lead in all matters of concern in the life of the borough and aims to meet and greet as many of its citizens as possible during his or her term in office.

The role of Mayor of Wandsworth is non-political, and she acts as the civic lead for the borough leading on civic matters such as the Chairing of Council Meetings, conducting citizenship ceremonies, meeting foreign dignitaries and royalty etc. In addition, the Mayor undertakes and supports a wide variety of charitable and fundraising events and the community life in the borough.

Sometimes people mistake the role of the Wandsworth Mayor to be something like that of the Mayor of London and consequently the Mayor’s Office is sent requests for assistance with operational front-line matters. We are unable to assist directly with those requests. Information in respect of contacting the Council regarding enquiries concerning front-line services and complaints can be found online.

To write to the Mayor or to invite the Mayor to a function or event please contact the Mayor’s Office:

Invite the Mayor to an event

The Mayor’s Office will not usually accept events that will lead to unnecessary social gatherings, or those where the attendees will be particularly vulnerable, such as care homes.

Your form and risk assessment will be reviewed by the Mayor’s Office which will be in touch ASAP.

The Mayor is happy to be invited to:

Any general enquiries relating to the Mayoralty should be directed to the Mayor's Office at:

For a Mayoral visit at an engagement you must complete your application at least 14 days before the date of the function.

You can request a Mayoral visit by downloading an application form and post to the address on the form or scan and send it to mayors.office@wandsworth.gov.uk.

Before completing a request, read our guidance on protocol for a Mayoral engagement.

Please note that while the Mayor and Deputy Mayor attend as many events as they can, prior commitments sometimes mean that a visit is not possible.

A member of the Mayor's Office will be in touch as soon as possible to discuss your requirements.

If you have any queries in the meantime, email mayors.office@wandsworth.gov.uk.

If for any reason the Mayor is unable to accept an engagement the Deputy Mayor may attend on behalf of the Mayor.

Up to The Mayor of Wandsworth